Skip to content
This research is focused on characterizing and understanding ErSb nanostructures in the THz regime utilizing various spectroscopic methods. The material was grown through molecular beam epitaxy by the Gossard group in the materials department, and consists of ErSb nanostructures embedded within a GaSb matrix as shown in Figure 1.

Figure 1: A) TEM cross-sectional image of ErSb nanowires showing alignment along the growth direction. B) Plane view image of the same sample. C) HAADF-STEM image showing the hexagonal atomic arrangement of an ErSb nanowire embedded with the darker GaSb matrix
Depending on the concentration of Erbium present during growth various nano-sized structures will self-assemble. For the smallest concentrations of Erbium, nano-sized spheres will assemble, but for higher concentrations nanowires will align along the sample in an orientation dependent upon the concentration of Erbium present as shown in Figure 2.

Figure 2: Different Erbium concentrations lead to very different ErSb nanostructures assembling. The shown figures were grown with 3%, 10%, and 20% Er, respectively
Using tools such as our high-speed asynchronous time-domain THz spectrometer we are investigating the behavior of these self-assembled semi-metallic ErSb nanowires which can act as an excellent polarizing filter to THz and infrared radiation. The efficiency of the polarization and magnitude of the nanowire’s AC conductivity changes with frequency and can be understood through a model that considers the exact shape, continuity, and coupling of the structures as well as a resonant feature characteristic of a quantum state transition within the confined space of the 5nm diameter wires. Shown in Figure 3 is one such measurement demonstrating the polarizing behavior of the ErSb nanowires. When the nanowires are aligned parallel to the polarization of the incident electric field a minimum in transmission is observed corresponding to the ability of the electrons to conduct along the path of the wires. A maximum in transmission is observed when the wires are aligned perpendicular to the incident polarization as the electrons are unable to move along the field’s polarization across the insulating GaSb matrix separating the wires. This interesting study of a previously uncharacterized material has gained significant interest and involves many collaborators from different groups and departments. 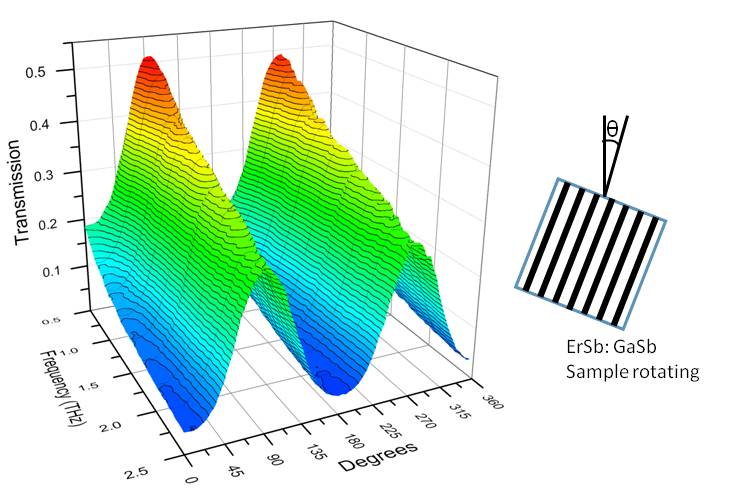