Skip to content
Many of the devices operating in the terahertz frequency range, such as the quantum cascade laser and quantum well infrared photodetectors, rely on intersubband transitions of electrons in the conduction band. These devices work very well at liquid helium temperatures where thermal effects are suppressed, but at room temperature kT is 25 meV, and 1 THz is only 4 meV. Quantum well based devices are subject to huge amounts of in plane scattering as the temperature increases, which causes the devices to cease to operate. It has been shown however that increasing the confinement of the electrons so that they are no longer free to move in plane increases the efficiency of these devices. However, current methods of doing this usually involve applying large magnetic fields perpendicular to the quantum well plane, which is not practical for creating a device. Quantum posts are the first nanostructure which is able to provide this confinement with intersubband transitions that occur in the THz region. The quantum posts are self-assembled nanostructures based on epitaxial quantum dots. They are roughly cylindrical regions of InGaAs embedded in GaAs.

Cross sectional TEM of two quantum posts. They are the lighter slightly conical regions.
The posts are grown using molecular beam epitaxy (MBE), and stacking quantum dots on top of each other so that they actually touch. This gives us essentially a large quantum dot with a height adjustable by the number of cycles we grow. The exciting thing is that we control the energy of the intersubband transitions in the posts by engineering the height during growth. Posts of different heights will resonate at different terahertz frequencies. 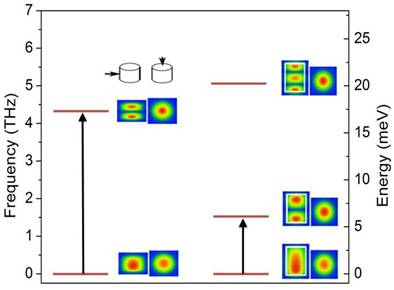 Current work on this project focuses on demonstrating this height dependence of the resonant frequencies, as well as attempts to implement the posts into cascade structures. Please refer to the publications section of the site for more information on the quantum posts.
Scroll Up