Skip to content
This project deals with the development of a near-quantum-noise limited heterodyne sensor for space applications, based on transitions between quantum states in semiconductor quantum wells, and that can operate at physical temperatures of 50K to 70K. We call this device a Tunable Antenna-Coupled Intersubband Terahertz (TACIT) hot electron mixer. The motivation for this work comes from the fact that all the other quantum noise limited heterodyne mixers, for astrophysics applications, use superconductors and hence require cryogenic cooling to operate at 4K. On the other hand, much noisier Schottky mixers, used for planetary operations, can operate at ambient mission temperatures (100K) but require local oscillator sources. TACIT detector can enjoy best of both worlds, where it can give near quantum limit performance and operate at 50K where passive coolers can be used efficiently. This sensor is to be used as the primary detector in a high-resolution heterodyne spectrometer for planetary atmospheric & cometary science. Figure 1 gives more insight into the operation of TACIT detector.

Figure 1(a) shows that a THz beam is focused by converging Silicon lens onto the TACIT detector. Actual Si lenses used are 10 mm n diameter. Figure 1(b) displays the optical microscopic image of a TACIT detector, showing “twin slot antenna” designed for receiving 2.5 THz. THz waves are prevented from flowing away from the active region by rf choke filters. Figure 1(c) shows SEM image of the TACIT detector with inset showing the active region.
TACIT mixer can be thought of as a four-terminal hot-electron mixer (See Figure 2). Two of the terminals are Ohmic contacts to a 2-dimensional electron gas (2DEG) which is contained in a GaAs/AlGaAs quantum well. These Ohmic contacts carry DC and IF (intermediate frequency) currents, and are used to sense the resistance of the active region. The other two contacts are gates which are connected to THz fields via antennas, and to DC voltages by filtered leads. THz radiation can be efficiently absorbed in the active region if its frequency matches that of an intersubband transition. The real part of the impedance which the active region presents to THz radiation can be engineered to be of the order of 50 Ohms for frequencies resonant with the intersubband absorption, and thus THz radiation can be coupled efficiently from a coplanar antenna into a relatively small number of electrons (~10,000). The absorbed power heats up electrons in the active region, which results in increased source-drain resistance. 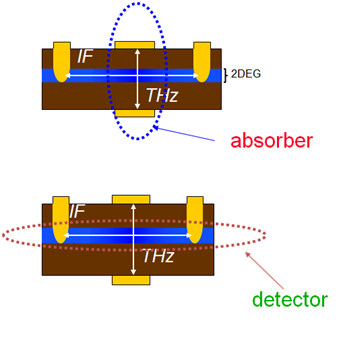