Mark Sherwin Proof01 by UCSB College of Engineering on Sketchfab

Intense laser fields can rip electrons from an atom and slam them back into it.  By using intense terahertz radiation, we have extended this idea to electrons paired with holes in a semiconductor.  We observe intense  field effects as optical mixing processes.  Optical mixing, a subset of the field of nonlinear optics, involves shining very intense laser light of one or more frequencies and measuring new frequencies.  Sum frequency generation, where laser one and laser two interact to create the new frequency f3 = f1 + f2, and frequency doubling are two famous examples.  These are interesting and useful scientific phenomena, but at their core they are effects that can be understood as relatively simple perturbative processes.  High-order sideband generation (HSG), on the other hand, is a highly nonlinear optical process that cannot be explained by perturbation theory.  HSG involves two frequencies of light, relatively weak near-infrared (NIR) light and very intense THz light.  When the two are combined in a carefully-designed semiconductor material, many new frequencies are created, as can be seen in fig. 1.  These new frequencies, or sidebands, are around the initial NIR laser frequency with a spacing of twice the THz frequency, or fSB = fNIR + 2 n fTHz.  We have observed as many 11 sidebands stemming from this phenomenon.

Figure 1: a, Linearly polarized NIR light creates excitons when incident upon the quantum well sample. b, Intense, linearly polarized terahertz radiation can accelerate an electron away from and back to the exciton core, resulting in a recollision that emits light. HSG predominantly occurs during a short time near the peak of the electric field, such that sidebands are generated in short bursts separated by half the period of the terahertz radiation. Modulations of the NIR beam in the figure are representative of the intensity profile and are not shown to scale. c, Sideband spectra quantum well driven at various terahertz frequencies. The signal from the NIR laser, of frequency fNIR, is reduced by a factor of 500. Sidebands are observed at even multiples of the terahertz frequency, fsideband = fNIR + 2nfTHz, up to 18th order (2n = 18). At the two lower terahertz frequencies (fTHz = 0.58 and 0.46 THz), we observe a plateau in the sideband intensity for the high-order sidebands that indicates the non-perturbative nature of the generation process. At the highest terahertz frequency (fTHz = 1.56 THz) and lower electric fields, the ponderomotive energy is smaller and many fewer sidebands are observed.
HSG can be understood semiclassically using a four step model, shown as a cartoon in fig.2.  First, a bound electron-hole pair, called an exciton, is created resonantly by a near infrared laser in a semiconductor sample.  Second, the very intense THz electric field created by the UCSB FEL warps the Coulomb potential felt by the electron so much that the electron tunnels away from the hole, usually near the peak of the THz field.  Third, once this tunnel-ionization occurs, the electron is free to accelerate in the strong THz field away from the hole.  About a quarter of a THz period later, the electron gets accelerated back towards the hole it originally left behind.  Lastly, if the electron tunneled out at an appropriate phase in the THz field, when it gets thrown backward by the field it will recollide with its hole partner with significant kinetic energy.  When the particles recollide, they annihilate and emit a photon with more energy than the original NIR photon, thereby creating the sidebands.  The stark asymmetry between the positive and negative sidebands, cf. fig. 1, strongly supports the recollision model.  At the instant the exciton tunnel-ionizes, the electron and hole start with zero momentum and thus zero kinetic energy.  This means they can only gain energy from the THz field, and so when they recollide and annihilate, they must create a higher energy photon than that which created them in the first place. 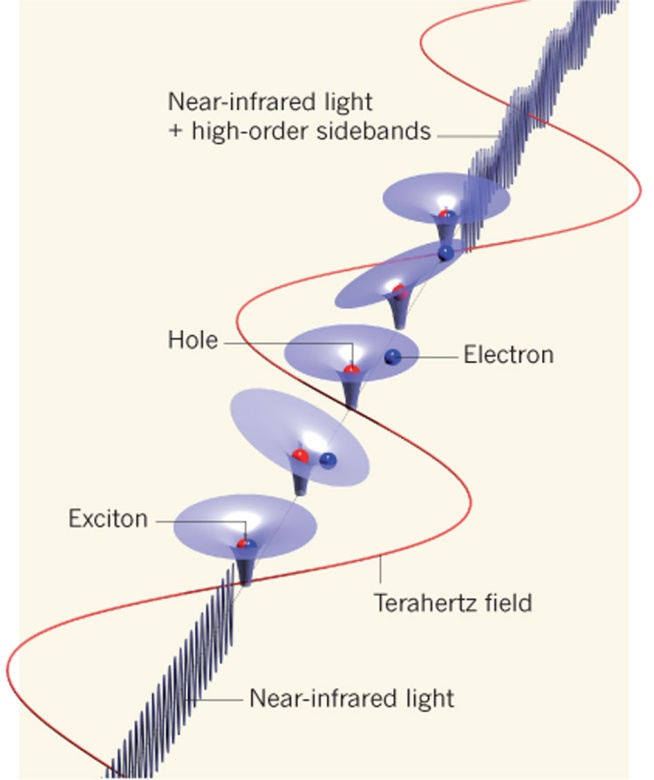 Figure 2: Starting in the bottom left, the NIR laser interacts with the quantum wells to create an exciton.  The strong terahertz field then tilts the electrostatic interaction between the hole and the electron, causing the electron to tunnel-ionize.  The electron then recollides with the hole, creating a photon with more energy than the initial NIR laser photon, shown as an amplitude modulation of the NIR laser line.  Huber, Nature, 2012
The study of HSG opens up many exciting avenues of research.  In particular, the high degree of coherence required and the strong dependence on the electric field could allow for new tests of exciton and hot electron physics in semiconductors.  There is a parallel phenomenon in atomic and molecular systems called high-order harmonic generation (HHG).  In fact, much of our early understanding of HSG comes from the excellent work done in HHG from the past few decades, but it is possible that the two phenomena can be used together to further understand recollision physics.  From a more practical perspective, it is conceivable that this could be done on-chip using very high frequency transistors, which could translate to optical communication at terahertz frequencies.
UCSB Researchers: