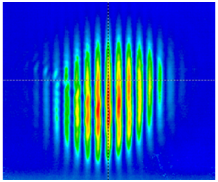 By using a static THz interferometer the frequency of the free electron laser (FEL) can be precisely measured in a single shot. On the left is shown an interference pattern produced by the interferometer for the FEL operating at 0.59 THz. Not only the laser frequency, but the whole spectrum in the range 0.1 – 4 THz can be obtained using this so called holographic Fourier transform spectrometer.

UCSB is a world leader in III-V semiconductor processing and molecular beam epitaxy (MBE). The state-of-the-art Nanofabrication Facility, one of the premier university cleanroom facilities in the country, was recently augmented by the engineering sciences cleanroom–occupying the entire first floor of a brand new 90,000 sq. ft. building.

Terahertz Sources – all in one convenient location

Central to our experimental facilities are the free-electron lasers or FELs (0.24-5 THz, 50-1000 µm, 10s kW peak power, 1 µs pulses) at the Institute for Terahertz Science and Technology. These are the world’s premier sources for intense, coherent terahertz radiation. At the output of the FEL is a pulse-slicer, capable of slicing short pulses (adjustable from 10 ps – 100 ns) out of the main FEL microsecond pulse.
CW Virginia Diodes coherent sources: 240 GHz 1THz. These sources made by Virginia Diodes multiply a 13 GHz coherent microwave source up to 240 GHz in one source and 1 THz in the second source. These sources are tunable around these central frequencies.

Our experimental expertise is in special techniques for the terahertz frequency range. These involve a combination of far-infrared, near-infrared, ultrafast, and RF techniques at low temperature.

The output pulses of the UCSB Free Electron Laser have a duration of roughly one microsecond. For many experiments, however, it is desirable to have precise control over a wide range of pulse widths. The Pulse Slicer operated by the Sherwin Group extracts THz radiation pulses from the FEL output that can be varied between 10 ps and 100 ns in duration. An intense optical pulse from a regeneratively-amplified Ti:S laser excites free carriers in silicon wafers. The thickness of these wafers is precisely tuned so that they become efficient mirrors for THz radiation upon exposure to the intense optical pulse. The FEL microsecond THz pulse is passed through two reflection switches made of the silicon wafers, which defines the beginning of a short pulse. The end of the pulse is defined by an optical delay stage that controls the time before a transmission switch (silicon wafer) cuts off the outgoing THz pulse. This control over THz pulse width has made it possible to demonstrate such phenomena as Rabi Oscillation of electrons bound to shallow donors in GaAs.

An intense terahertz pulse from the pulse slicer drives electrons in the device from localized to extended states. This results in a change in the conductivity in the RF frequency range. Coherent terahertz oscillations of electrons can be mapped out stroboscopically by measuring the photoconductivity vs. terahertz pulse length or delay.

In optically detected THz experiments, changes in the optical absorption, photoluminesence, or resonant scattering due to THz irradation are measured. We have used this technique to investigate collective dynamics of electrons in quantum wells, and recently, as a technique for reading out the quantum state of shallow donors in GaAs.

Broadband THz radiation with time duration on the order of a picosecond is generated in a semoconductor wafer by incident near-infrared (NIR) 150 fs laser pulses. The THz is created by either difference frequency mixing of the NIR in a semiconductor with a second-order susceptiblity nonlinearity, or by photo-created electrons accelerating across the surface depletion fields of a doped semiconductor.

THz transmission or reflection can be measured by placing a sample in the path of the terahertz and comparing the measured spectrum with a reference spectrum taken with no sample.

An intense terahertz field (FEL beam) modulates an optical beam as it passes through a device. The modulation results in sidebands on the optical beam, separated from the fundamental by an integer number of terahertz photons. As a magnetic or electric field tunes the sample through a terahertz resonance, the sideband peaks. This technique was used to observe, for the first time, Autler-Townes splitting in a quantum well.

The FTIR is a Michelson interferometer used to measure infrared absorption of a sample. Our Bruker IFS 66v can be used in the near, mid and far IR, providing absorption spectra over an extremely wide spectral range (1-500um), using a combination of alkakli-halide and mylar beam splitters and InSb, HgCdTe (MCT), and bolometer detectors for detection.

The FTIR sends a collimated thermal source with a broad emmision spectrum through a sample and into a Michelson interferometer. The instrument sweeps the mirror in one arm of the interfermeter at a constant rate. An interferogram is produced by measuring the intensity at the output of the interferemeter as a function of time. For low-light measurements the interferogram can be built up by repeatedly stepping the mirror and collecting a single data point.

The frequency spectrum is obtained by taking the Fourier transform of the interferogram and subtracting it from a reference spectrum taken with no sample. Our FTIR is mainly used to measure FIR intraband absorption spectra of coupled quantum well and dots, but we can also use it to measure the thickness of wafers by measuring the spacing between Fabry-Perot fringes.

There are many tips and tricks on our particular machine, a Bruker IFS 66v.